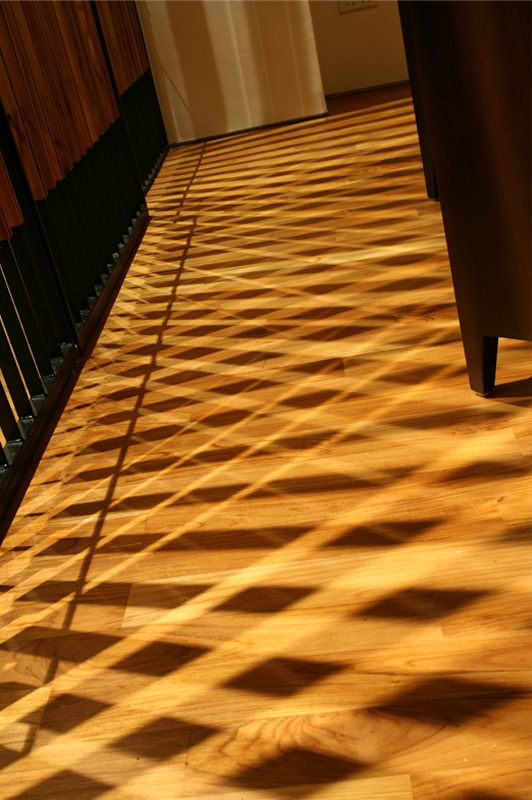 The National University of Singapore introduced a Core Curriculum Course for about 300 of its Arts, Science and Computing students in July 1999.  An area of floor space on level 8 at Block S16 was thus designated as the administrative office for the course, while a new building is being planned for completion in the near future.  In addition to the administrative function of the Core Curriculum Office, the space was intended to be a home for Core Curriculum students.  A reading room was proposed as the communal space where students could enjoy a special private collection of books in between lectures.

Within the 1,500 square feet of floor space is designed a warm welcoming place for interaction and brainstorming – a home which is both reading room and gallery area, and an office component.  The most transparent spaces would be at the reception area and the reading room separated by sculpture displays built into the bookshelves designed as spatial dividers without using walls.

This strategy allows space to flow in between portions of a small sized room.  In addition, the office is to have an identity appropriate to the spirit of its academic programme.

Artworks selected, sponsored by NUS Museum, reflect the philosophy of the Core Curriculum – the Madubhani painting in the reception symbolises the culture and experiences of different people that shaped knowledge in societies. The sculpture Head by Nandhan symbolises the spirit of inquiry in the breadth and depth of core learning, yet another sculpture Snail represents the innovation possible in one field of knowledge inspired by the adaptation of existing ones in other fields.

The American Studies Centre is a centre that is established in recognition of the importance of the United States in Asia, with the emphases on interdisciplinary and comparative approaches to the study of American society and culture. From the conceptualisation of the American Studies Centre office project to its eventual completion, the design (and its process) of the space tilts the expectations of what is conventionally conceived as institutional.  New ideas and different ways of designing an office space for an institution have been looked into during the design process, with the aim of bridging the public image of the institution with that of the corporate world.

The reception to the American Studies Centre was at first a hole in the wall off an uninspiring and oversized lobby in the Arts and Social Science Block.  The Director’s office and her secretary occupied a little 9×6 m corner at the front-end of the block.  The brief called for additional space to accommodate two staff officers in addition to the Director and her secretary and a fair bit of working and storage arrangement for an expanding Department.

The initial plan was to organise the staff officer’s and Director’s rooms around a transparent stretch of wall facing the lobby, with only one entrance, from lift lobby to the reception foyer of the Centre.  Long stretches of wall partitions were used for storage elements such as full height cabinets. There were also studies on alternative locations for the Director’s office and the main administrative workspace in the exploration of various comfortable arrangements of usable space.

The last activity is marked in the final version by a checkered pattern counter made out of two types of wood veneer, beech and walnut, some of which mark out little drawers for Academic Registration Forms. There are also voids in the cuboid-checkered form, intended to create a perforated face for the solid counter in a small reception foyer. reception foyer is perceived as a transparent space with a fully glazed wall fronting the lift lobby, which allows the two access corridors to be visually linked diagonally through the foyer.  A slender aerofoil-like bench marks the reception space where the staff officer steps out from her niche space to deal with queries over the checkered counter.  On being seated at the bench, one sees through two layers of glass; the boundary partitions of the American Studies and beyond that, the external glazing of the building beyond the atrium roof.  This layering of space frees the physical limits of the little office by extending the visual range of its occupants beyond its boundary partitions.

Staff tabletops are furnished in a contrasting pear veneer, which sets off the natural hue of the MDF clad partitions and built in cupboards used as spatial separators.  The design plan of the American Studies Centre was defined by three parallel stretches of full height cabinets. Outside the office, a fourth parallel wall (which is the staircase and lift lobby wall) is painted a deep blue colour to contrast with the MDF brown of the office interior. A Sunar Sugiyou triptych Java Java stretches the front face of the blue wall.  At the reception foyer, the sleek aeronautical lines of the woodwork are set off by a Dakshinamoorthy Head in a highly pose finished in textured granite.

Two apartments in Kent Vale Housing were refurbished to accommodate Senior/Distinguished Visiting Professors for periods of time which would make it more viable for the National University of Singapore to consider as an alternative to five-star hotels.

The refurbishment of one 160 m2 apartment is described here. The existing three-bedroom flat was configured as a collection of rooms with doors off a corridor from the living/ dining space (including the kitchen). This made the living, dining space small in spite of its 48 m2 floor area. For the purpose of Visiting Professors, a larger space with fewer bedrooms was preferred to an apartment with small rooms more suited for full-time staff with families.

The design strategy was to remove the two brick walls between the three rooms viz. the living room, bedroom 1 and the Master Bedroom. Bedroom 1 was converted into a study space, informally set as a parlour with a view out to the terrace and connected to the living room with a sliding timber screen.

The Master Bedroom is a surprise that unfolds from a sliding travertine wall. Both screen and wall enable study parlor, living room and master bedroom to be connected as one continuous space covering 75 m2. This had the effect of transforming the apartment into a space of a large hotel suite enabling the university to adapt the configuration of the apartment by expanding or contracting the spaces of the three rooms.

The timber strip floors of teak wood set off the travertine wall and the furniture pieces in fabric, wood and cane. Built in shelves were constructed of plywood finished in veneer of reconstituted wood in clean lines to compliment the lines of the furniture pieces. When the travertine wall slides open, a landscape painting stretches across the entire width of the wall above the headboard of the master bed. The oil painting in dark colours of Prussian blue, indigo, iridescent white and Emerald green and was painted by the architect to compliment the night view from the living room window. The kitchen space is extended as a niche from the dining space with a frosted glass panel screening off the yard railing. Bathroom doors and wall panels are also finished in frosted glass to consistently set off the plaster walls along one side of the corridor leading to the bedrooms.