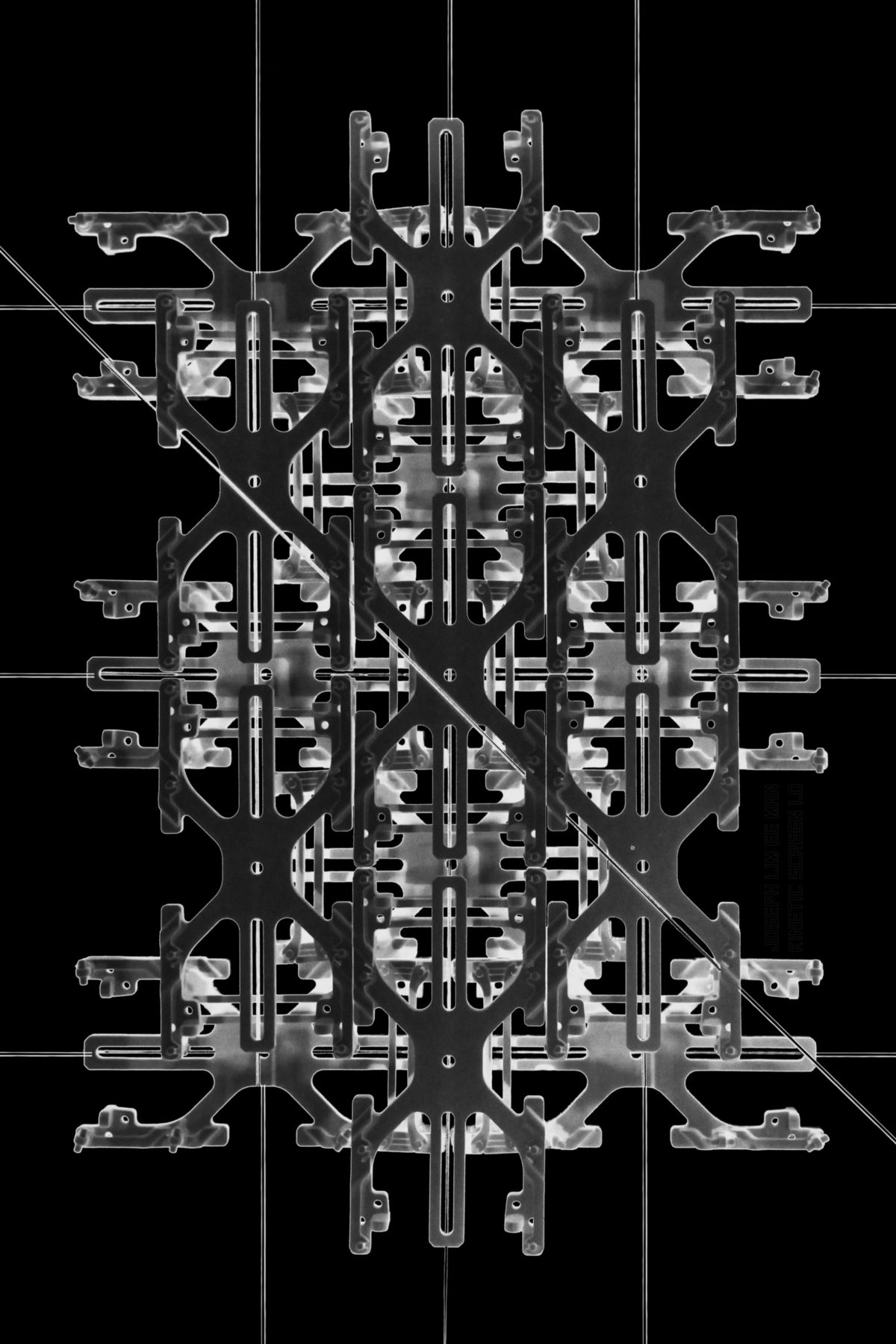 [Video] This prototype is a kinematic translation of a momotani fold. Its application is for a kinetic screen adaptable to sun paths and sun angles in any location, by varying panel positions in x, y, z axes to optimize shading coefficients for buildings. But why does the external screen need to change its shape? In the tropics, both east and west facades are subject to extreme solar heat gains. When they face the best view on site, the requirements of visual transparency and being heat reflective contradict each other. A static screen cannot vary its porosity or opacity whilst providing shade from the sun. With static screens, the opaque elements designed for glare control on a bright day will also excessively reduce daylight on an overcast day. So the Momotani kinetic screen overcomes these contradicting requirements by changing its surface depth and porosity when climate conditions change often throughout a day. In enabling kinetic action, the Momotani screen is rationalized and developed into a five panel cluster satellites. Each satellite has four sets of arms; each set supporting two half-panels which rotate out from the base frame. The interfacing structure (1.2m away from a building facade to allow for airflow and prevent heat-build up) supports a H-frame with two vertical masts moving horizontally. The vertical masts incorporate tracks for pairs of satellites to move vertically in opposite directions. This mechanical assembly may be controlled by a video camera adjusting the panel positions to cast a maximum shadow (shade), depending on sun positions.

The screen panels can fold vertically and horizontally, in independent sequences to provide sunshade in a range of different formations. The range of movement allows flexibility in localizing shade to one part of a building facade. Similarly, the screen can control its porosity to light penetration by varying the folding degree of its panels. This allows parts of the building facade to act as shields when struck by the sun, leaving other parts more or fully unshielded. This also minimizes heat penetration whilst maximizing shade to specific parts of a building surface, in changing sun paths. The kinetic screen can also be programmed to reduce glare between the tropical sky and its adjacent interior space in order to provide a useful range of daylight illumination. The operational range for such a screen includes daylighting for overcast days and shading of the interior in low sun angle conditions. Between heat shield and sun shading positions, the Momotani kinetic screen is able to change its surface depth to effect its overall thermal transmittance value and transcends the limits of its individual material properties and thicknesses.

As a potential wind baffle, the screen panels in folded positions can also orientate towards prevailing wind directions to provide effective ventilation to interior spaces. The role of the tropical building envelope as an active element in natural ventilation is now possible, in addition to its shading and heat reflecting functions. Whilst the kinetic screen is primarily designed for sun shading, there are a range of applications, which may be explored within the range of its panel movements. Of significant advantage is the ability of the kinetic screen to dynamically alter its panel orientation in relation to the direction of light or wind energy. In addition, light can be reflected or diffused dynamically when panels move between stationary to symmetry and asymmetry formations. In such applications, the building envelope has the potential to play a dynamic role in urban lighting and acoustics. Solar cells can be mounted on the panels to augment the electrical power needed to activate the kinetic screen.